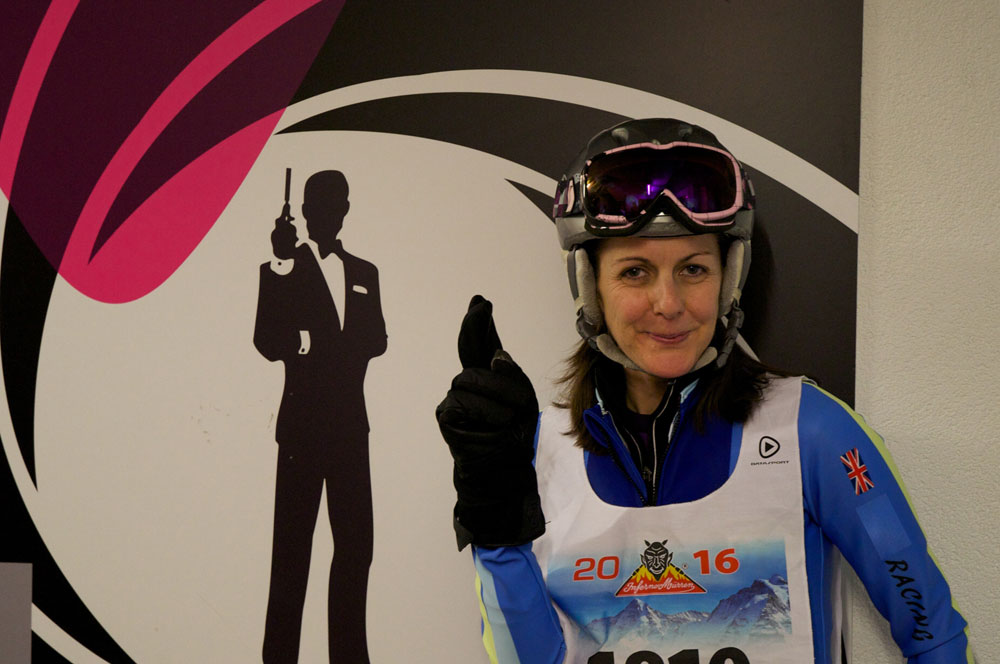 As the professional ski circuit hit Kitzbuhel, Austria for the infamous Hahnenkamm, with big name skiers getting injured on the mountain in tough conditions; just across the Alps, in Switzerland, a ski race on the amateur level was taking place. No less impressive in its backdrop or in the numbers taking part – this was ‘The Inferno’.

Now running in its 73rd year, The Inferno, in Mürren, combines tricky steep downhill skiing sections with stamina challenges over uphill stretches and long straight schuss’ to test the legs. This year’s race had the finish set at ‘Winteregg’, just 9.5km long (rather than the 14.9km when snow allows a finish at the bottom of the valley in Lauterbrunnen). The 2016 winner’s time, just 8.16 minutes, but more on that later.

Last year I posted a photo on the Mürren Facebook page and won a VIP place in this year’s Inferno ski race. That meant I had a very special start time of 8.56am, but what a double edged sword that turned out to be.

All VIPs (a mix of media, sponsors, photographers and me), as well as the ski patrol and the big Inferno chief Christoph Egger, had to be on the first cable car up the mountain at 7.10am. Skating on my race skis through the pretty, sleeping Mürren village in the dark, just before 7am was a strange experience – nerves already kicking in, I’d barely slept a wink and had woken practically every hour to make sure I hadn’t slept through the alarm.

Birg, the mid station at 2677m glowed in the darkness as we arrived into the rock face. Then, with just a few minutes wait we were on our way up the second cable car to the restaurant, Piz Gloria, at the Schilthorn, at 2970m. It was just after 7.30am and a strong wind didn’t do much for my nerves, the cable car bumping sideways into the top station.

Shortly after breakfast, Egger took to the microphone to explain, to nobody’s surprise, that due to bad weather, the race would have to be delayed without doubt and dependent on a helicopter being able to fly, the course may be moved lower down the mountain.

As the restaurant vibrated to the blast of avalanche bombs we knew that the chopper was out there making the course safe for the 1850 racers. Then the announcement came that we had lift-off, as it were, albeit with an hour’s delay.

Just after 10am, the first racers set off down the Inferno ski course. The top schuss was clear of the thick cloud that had been billowing in and out all morning. My early start number, a confusing number ‘1819’ meant i was about the 30th racer down the course. In my head I’d envisioned a corduroy course and a faster time (this being my 6th consecutive year of racing, but not with this early start).

The top section of my race went ok. My skis wobbled a bit on the first steep pitch before the long schuss, which was unnerving. After the second schuss and climb out I was pretty tired, but nothing prepared me for the thick cloud, snow and fog which appeared as I careered around the corner above the narrow Kanonenrohr section. My goggles had completely fogged up and were snowed over, I could not see anything between the gates and the blue painted lines on the snow that show the course had vanished. I found myself stationary without a clue where I was.

Trying not to panic I sort of snowploughed around for a bit and suddenly saw someone way over to my left (skiers are set off in roughly 12 second intervals). Realising I was way off track I skidded through the narrowest section of the course, veered way off the next section and before I knew it was on the ‘shoulder’ at the top of the Allmendhubel funicular, normally a place for tucking straight for the crowd followed by a huge left bend. I managed the tuck – see picture below – but was too late to get much speed up for the climb up ‘woodcutters’. After a slow climb and a painful few last piste stretches, and one final uphill climb to Winteregg – I’d pretty much written off my run. At 16 minutes and 17 seconds this my slowest time and worst Inferno race ever.

Less than two hours later, the weather had cleared and my friends were flying down with super-fast times. I was pretty gutted for myself, having had high hopes with my special early start number, but the feeling didn’t last long as the local bands started playing, the beer started flowing and the camaraderie of everyone supporting each other took over.

Everyone has an inferno story, a tough climb, a fall on the corner, a faster time, a slower time. The Inferno 2016 winner, Brian Brog from Meiringen, came through in bib no 1753 at around 4pm in 8 minutes and 16 seconds – the temperature having dropped and the course running faster as the day progressed.

Cheers went up just before this for the main ‘celebrity’ racer of the day, Pippa Middleton. She had raced all three events in the Inferno, the x-country, the GS and then this main downhill event. Her first Inferno and she completed it in just over 12 minutes.

I guess I’ll just have to go back and try again next year!