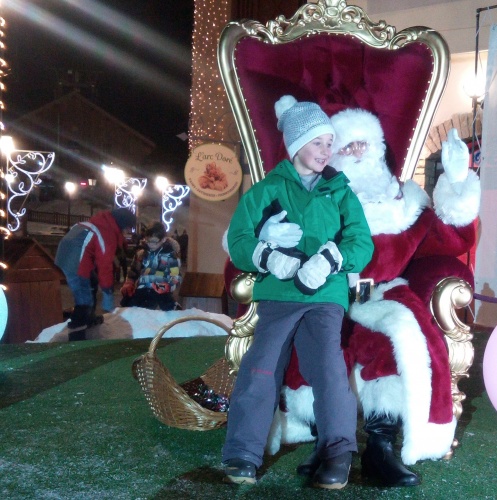 There has been a shortage of snow at many resorts in the Alps over Xmas, but does that mean fun can’t be had? PlanetSKI reports.

Is the glass half-full or half-empty?

There hasn’t been a decent amount of fresh snow in this part of the Alps since the middle of November.

Certain sections of the media are reporting an Xmas washout.

But I beg to differ.

There are hardly bumper conditions but there is more than enough snow at Arc 1950 for some fun.

It’s five years since I have skied before Christmas with the family and with a full week of school holidays before Santa dropped in this seemed like the perfect chance to squeeze in an extra ski trip.

Having watched the early season snow, or lack of it in recent weeks, we were feeling slightly smug with our booking in Arc 1950.

Bourg St Maurice seemed especially green as we left the valley for the climb up to 1950.

I’d been watching the webcams and knew there was snow in the village which, sitting at 1950m literally just below Arc 2000, was great to see when we arrived late in the evening.

I haven’t skied in Les Arcs since going with my parents when I was about 12 years old.

Arc 1950 wasn’t even conceived then, only being built from 2003 onwards. Originally built by Intrawest, the village was cleverly designed to be ski in out but in a more traditional style than the 60s and 70s block buildings of the other neighbouring ‘Arcs’.

Over our five day stay, we loved being able to ski to the door and having everything you need literally on your doorstep makes skiing as a family so easy. No buses to catch or cars to negotiate whilst steering small people around in heavy ski boots. The children were so safe going out each morning to buy fresh croissants from the fabulous L’Arc Dore bakery.

All the pistes above Arc 1950 were in great shape despite no recent snowfall. The little snow we did have mid week freshened the slopes but not enough to cover the bare patches in the lower villages.

Despite the lack of snow, we loved the runs down to Peisey Vallandry, mostly on man made snow but catching some early season sunshine they were surprisingly soft and easy to ski on. We also took the incredible Vanoise Express over to La Plagne which was a great adventure day out to make from Arc 1950.

From the top of the Aiguille Rouge at 3226m, the red run down was icy in places but we easily found some grippy snow along the edges and taking the Lanchettes chair above Arc 2000 we could see the black ‘Genepi’ looked skiable (we didn’t make that run with our youngest). Black ‘Combes’ under the Lanchettes was fun with just the odd stone/rock to hop!

Restaurant Bulle, the huge luge run and the Igloo village with giant airbag make the ski area above Arc 1950 under the Arcabulle chair a fun place to hang out.

In addition every evening Arc 1950 had a selection of activities -ski joering, remote controlled cars, night skiing and more, the highlight being Santa’s visit with reindeer giving sleigh rides around the village.

Perfect for a few days family skiing in the run up to Christmas.

For us the glass was most definitely half-full.