Easter Skiing in the French Pyrenees 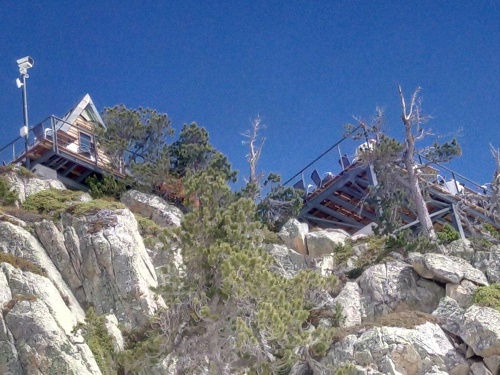 We started with 30cm of fresh powder & ended touring the religious shrines of Lourdes on Good Friday. Plus had some great Spring skiing in between.

It’s been more than 15 years since I last skied in the resorts of Bareges and La Monjie that make up the 100km ski area of the Grand Tourmalet.

There have been many new lifts with more to come as PlanetSKI reported earlier, but it still retains an authentic and original Pyrenees feeling.

There are good value flights to Lourdes and an equally well-priced apartment in the village of Bareges – I booked through the same tour operator I had travelled with 15 years ago, Borderline Holidays.

As the week progressed more of the slopes closed down under blazing sunshine and blue skies, but each day we had enough snow.

There was the short black run, Coupe du Monde, a challenge for our youngest son Zac aged 8.

From there we accessed the fast red runs above La Mongie – pit-stopping at the Igloo bar in the ski-in-out village for crepes and coffee mid morning.

We found a perfect picnic spot in the rocks to the side of the main piste on several of our days.

Perfect picnic spot on the rocks

A new restaurant opened in February, ‘Chalet des Pisteurs’ – playing funky but mellow dance music and with a huge terrace perched literally on a huge rock above the top of the Pourteilh chair.

One morning we booked in for ‘premier traces’.

Our ski patroller, Bernard, told us sometimes they get to ski powder on these early starts but of course, at 8am in mid April, we had ear-deafening ice to screech down.

Early start with the ski patollers

No matter as watching the sun kiss the top of the mountains as it rose, was beautiful.

A highlight of the trip.

The Espade blue slope in to the main bowl hitting perfection in terms of condition just after 9am.

All too soon our week of Easter family fun was over.

With only a 40 minute drive to Lourdes we decided to pay a visit to the religious shrine.

We took the 100 year old Pic du Jer funicular above Lourdes for the 360 panoramic views of the area.

We speed hiked to the summit with its huge cross, followed by a flying visit of the medieval castle.

Climbing the 104 steps up the tower offers great views over to the main church.

Many spaces in the castle now feature museum-style rooms showing displays of the Pyrenean past.

We all loved the old ‘latrines’, simple slats high up in the rock and the ‘drop-box’ through which boiling oil or molten lead would be tipped on to the enemy below.

My daughter has been learning about Bernadette’s vision of the Virgin Mary at Lourdes at school, so a visit to the famous grotto was imperative.

Followed by a quick peek in to the huge underground basilica.

We must have watched 50+ wheel chairs process in for the Good Friday service.

Even if you are not religious the place feels serene and being out of the busy summer months, it was not too busy.

Taking off from Tarbes-Lourdes airport after a week of skiing and a taste of culture, and skiing to almost to the last day of the winter season, felt all the sweeter for being booked so last minute.

We had managed to squeeze in one week skiing before the Grand Tourmalet closes on Easter Bank Holiday Monday.

I was hoping to ski the Pic du Midi on this visit.

It is a huge off piste and freeride area that the PlanetSKI editor, James Cove, has skied a few times and he highly recommends it.

But skiing the Pic du Midi is the one I’m coming back for.

With thanks to Intersport for ski rental.

Book Winter Breaks to the French Pyrenees with Erna Low >>

Book Winter Breaks to the French Pyrenees with Ski Weekends >>