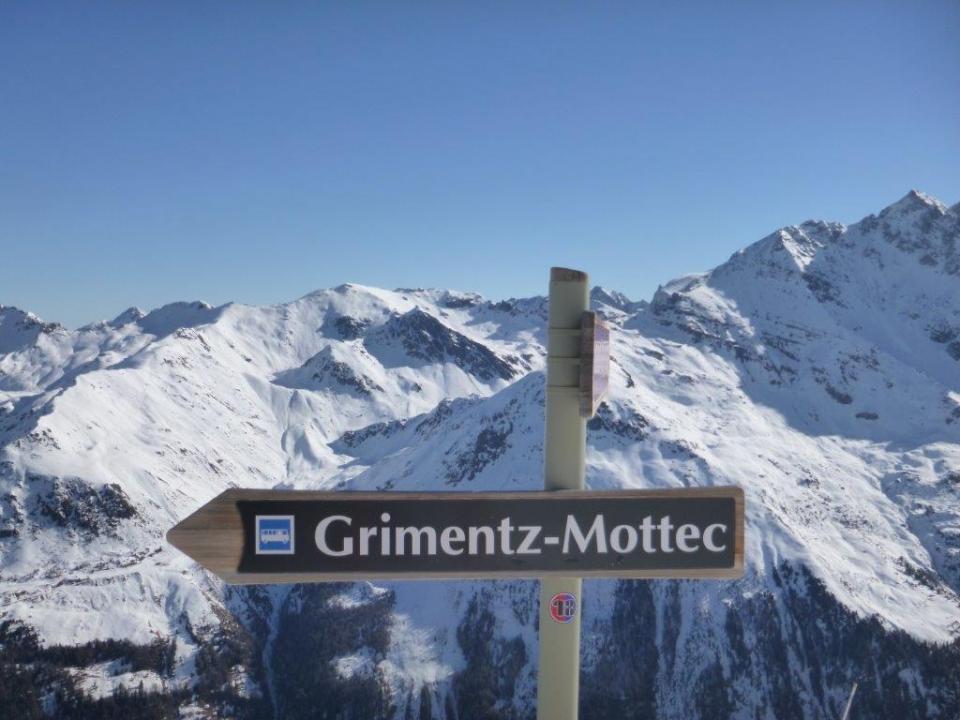 After a short hike uphill and along a 500m traverse to the left, we stepped over the small snowy pass and looked towards an open plateau. We were greeted with views over to the Bec du Bosson hut – a breath-taking panoramic with the Zinalrothorn, Weisshorn, Dent Blanche and even (in the far distance) Mont Blanc peaks all in view.

Nick Parks, a mountain guide who set up Grimentz Zinal Backcountry Adventures last winter (and also of Mountaintracks) had brought us up to this area to ski the Torrent de Lano route back down to Grimentz from behind the Bec du Bosson mountain. There hadn’t been any fresh snow for at least 10 days, so picking the best routes is tricky stuff for guides who have clients after those perfect days on the mountain all week.

The previous day without our guide, we had cruised the pistes and ‘side country’ as Nick calls it – chalky, grippy snow on the sides of the pistes made it easier to navigate than the super steep pistes in Zinal, and especially the Chamois run to Grimentz which was like an ice rink in places. Grimentz has more pistes than Zinal, long sweeping reds and a small children’s area at the base area, but it is still small compared to the huge French linked resorts. No queues, few people. We loved it!

Back to our guided day beyond Bec du Bosson – we had an insider with us, Ray, ex-Chamonix ski bum who moved to Zinal a few years back for different terrain and less people. Instead of negotiating the slippery black Chamois piste down to Grimentz, he took us to a little area he had skied the day before and there, for a handful of turns, we had… powder! Incredible after such a snow-free time. This, we are told, is typical of this Val d’Anniviers region – if you know where to go with a guide or, as we had, our very own local ski bum for the day! Beyond the powder field, Ray and Nick took us down through the trees, bush-hopping at times but again through lovely deep powder snow and finally emerging out on the track to Grimentz.

Back to our hike… with skis back on, we headed down the open plateau, not a person in sight apart from our little group – down firm ‘spring’ snow, gradually making our way to the steeper narrower section, following Nick, picking the best route through the valley. Some touring tracks in the distance were the only sign that other people had been in this area.

Half way down, Ray and Nick’s wife Nicky, who had also come with us for the day, split left and took a steeper route down a couloir which they hadn’t skied before, and which we subsequently named ‘Ray’s couloir’. Watching from below they had perfect spring snow, avoided the scratchy gulley which we had side-slipped through and joined us on the main run out of the valley.

In Grimentz we sat outside the Hotel Alpina in the spring sunshine and looked back up to see the huge mountain we had descended, a fantastic feeling!

These big mountain descents are what make this area special – wild mountains with mixed terrain – steeps, trees, open plateaus and few people. It’s a valley which is relatively untouched by tourism. Mostly simple chair lifts and long single button lifts, although the opening of last year’s 32 million cable car link from Grimentz to Zinal has made moving between the two areas much quicker and easier.

Across the valley, Nick shows us the mountains along the Imperial Haute Route, less well known than the popular Chamonix to Zermatt Haute Route – it looks impressive.

On the slopes, there is a noticeable lack of ‘on mountain’ restaurants, just the 60s built cafeteria style buildings at the base of each resort and perhaps one in each resort higher up the slopes (Orzival at Grimentz and La Marmotte in Zinal). But step further afield with a guide and you can find the gems.

“L’Ecurie” with its charming owner Etienne, is cooking up a storm with his flame-fried Rosti – locally made cognac thrown over – served with succulent, local pork stew. Snow shoe-ers walk up for lunch, and two days earlier we’d skied down another lovely long off piste route  ‘Orzival’  to find the little restaurant above St Jean.

Our final treat after our back country ski was back in Zinal, at ‘La Marmotte’ where there was a real sense of spring and the end of the season. A local accordion band was playing beside the restaurant and a few couples joined in to dance. The biggest paella-style pan was serving delicious plates of huge garlic and butter-fried prawns, and parapents were flying close overhead. Ray had fetched up his dog Saffy and we relaxed together in the afternoon sun. A perfect end to probably my last ski of the season.